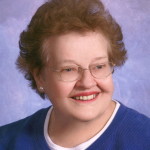 Born in Belvidere, NC on September 20, 1931, Mrs. Garrett was the daughter of the late John Jolliff and Hannah (Savage) Jolliff. After completing her education, she made her career as a teacher in North Carolina and later with the Christina School District, retiring after many years of dedicated service to her students.

Mrs. Garrett was a longtime and active member of Newark United Methodist Church, where she served as a former president of the UMW and as the church’s librarian for 45 years. She enjoyed working in her flower gardens and loved cooking. Gentle in spirit and generous to all, Mrs. Garrett was a devoted and loving wife, mother, grandmother, dear friend and servant to her church. She will be greatly missed.

In addition to her parents, Mrs. Garrett was preceded in death by her husband of 48 years, Charles Monroe Garrett who passed away in 2006. She is survived by her daughter, Tammy Walters (Kenneth); son, Joel J. Garrett (Kelley); grandchildren, Benjamin Garrett, Amanda Johnson and Danielle Holland; and 3 great granddaughters.

A visitation for family and friends will be held from 6 pm until 8 pm on Friday evening, July 17, 2015 at the Newark United Methodist Church, 69 E. Main Street, Newark, DE 19711. A celebration of life will be held at 11 am on Saturday morning, July 18, 2015, at the church. Interment will be held privately in Gracelawn Memorial Park, New Castle, DE.

In lieu of flowers, memorial contributions in Mrs. Garrett’s name may be made to the Newark United Methodist Church, at the address listed above.